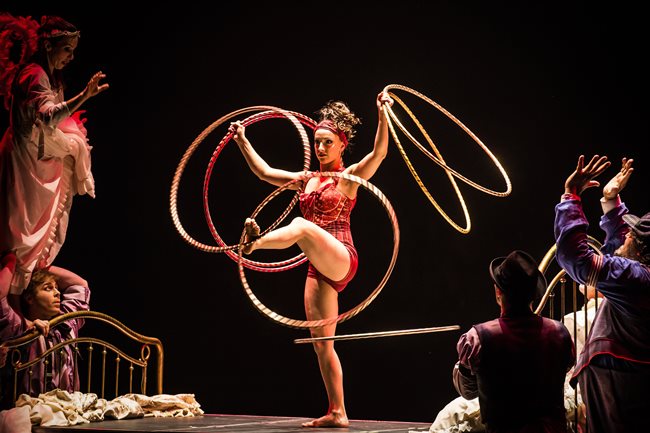 Cirque du Soleil has managed to put the fun in funeral.  How?  By centering the entire show around the funeral procession of a clown.  Corteo, which means a joyous funeral procession in Italian, is one of Cirques older show, having debuted way back in 2005.  It has been resurrected recently to tour as an arena show where it made it’s way to the DCU center in Worcester, Massachusetts.

The first thing to notice is that the show is theatre in the round, with audience members on both sides.  This was an ingenious way to give every person a great seat since none are too far from the stage.  It is also impressive to notice how all of the work is done in full view to audiences on both sides.  Creating this show in this way a an smart way to give everyone a close-up view while moving it to large arenas where many people would attend .

Corteo centers around Mauro the Dreamer Clown who is witnessing his own funeral as various performers, clowns and acrobats ply their trade in tribute to both life and death.  You would think such a story would be a downer, but really, it’s a celebration of life.  Corteo exists as a kind of ghost, uplifted by angels to heaven while simultaneously trying to stay in his life. As is typical for a Cirque show, you see many acrobats who perform in non traditional ways.  Instead of trapeze, they use chandeliers to swing around the stage.  Instead of trampolines, they bounce on beds.  One of the most unique parts of the show centered around the Clowness, a diminutive female clown who strapped herself to giant helium balloons and would float, first around the stage, then over the audience.  People in attendance could push her by the feet to and from the stage as she floated about.

Death is a major theme of this show, but not in a morbid, creepy or scary way.  Like many topics, Cirque tends to add a contemplative and theatrical flair to it’s themes and this is no exception.  At one point a troupe attempts a play within a play with a farcical version of Romeo in Juliet – perhaps the most well known play dealing with death.  In the next act, a pair of acrobats imitate the famous couple as they soar and dance above the stage by performing from long cords suspended in the air.  The act seems to end in a similar manner to Shakespeare well known play. Among the acts where many of the favorites of the modern circus acts.  These included jugglers, hula hoopers, a silk acrobat, wheel performers and many more.  The music is live as well, performed by a troupe of clowns who at times, become a part of the show.  At one time, there is a series of Tibetan bowls played that lends a unique music tonality to the show. A little person hanging from weather balloons set a striking visual image more than a spectacle of physical achievement.

The aerial work for this show was nothing short of amazing.  You could expect characters of all types to be almost anywhere on stage.  They would float on multiple levels, suspended upside down or even riding a bicycle.   One my the most impressive performers took this to a new level.  The typical French pole performer can do some tricks but often comes across more like an exotic dancer looking for tips.  Cirque however, went much further.  The pole would actually float, becoming completely detached from the stage as the performer took off with it.  The show seemed to defy gravity at every turn.  Teeter boards, high ladder walkers and a unique multiple high bar acrobatic act showcased skill, balance and gymnastics.

If there can be any complaint about Corteo it would have to be in comparison to other Cirque du Soleil shows.  Many others such as Luzia, which we gave 5 stars PLUS to, seem more fast paced and high energy.  Corteo instead seemed to take its time, to slow down and be more laid back, with the scenes connecting the acts lacking much plot or tension.  This seemed intentional since the themes of show center around contemplating life.  That is not to say that there are no high energy acts, there are for certain.  But I suppose you can only go so fast in a funeral procession.  Like other Cirque du Soleil shows, the show can be surreal in a way where visual spectacle is over-emphasized above stunts or storyline.

If you are a fan of Cirque du Soleil then Corteo does not disappoint. If you are not a fan, then Corteo might make you one.  Corteo will be at the DCU Center in Worcester Massachusetts until January 6th. 5 stars.