The Churchill War Rooms are Dark and Heavy with History (4.5 stars) 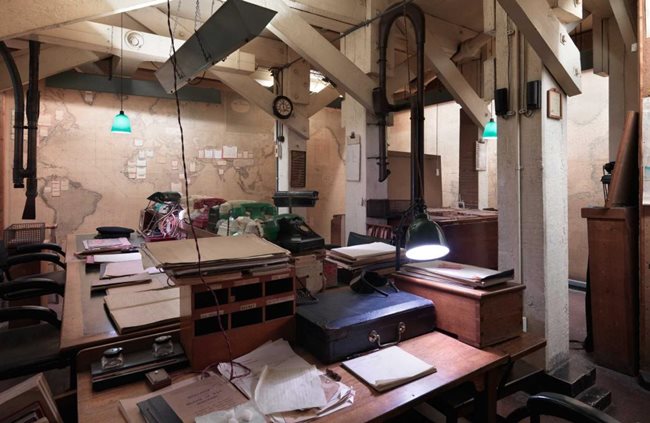 The Churchill War Rooms are the underground bunker, opened just recently in 2005, where former Prime Minister Winston Churchill and his top brass stayed protected from German bombing during World War II. They planned British military actions from there and coordinated the government during the most trying time in Britain’s modern history. They’re based quite close to Westminster Abbey and other tourist attractions in London. It begins with a German war bomb that’s hung above you from the ceiling.

The underground space is impressive from an intellectual point of view, and kudos to the curators for bringing such an impressive array of details to the visitor. That being said, obviously, it was built to be functional instead of decorative, so the museum is basically just a brutal bunker. After a while, that wears on the eyes. Of course we’d like a whiff of what it was like to live in dark spaces for months — but after a while the darkness and drabness becomes oppressive to visitors. Keep part of the museum dark to give us a sense of the World War II experience. But then, in another part of the museum, add lights, colors, and mirrors to reduce our feeling claustrophobic and shut in. We want to see it, not live it. You’ll learn a lot about Churchill and the other people who worked in the War Rooms, what they were like to work with, and what the conditions were like. It’s good but there’s just too much information for a person with a casual interest to take it all in. Including its darkness, it’s overwhelming. It is so detailed that I think you have to know something about history to enjoy this place completely. It’s a bit hard to access for kids, foreigners, and people who aren’t fascinated by history. If you are a history buff though, you could spend all day exploring some amazing computer monitor tables with touch strips, where you can learn what happened every week in every month of the war, and going back hundreds of years.

The museum features a large open hall that allows one to roam around at will, looking at displays. They do have some interactive displays including a ticker tape on the wall, and some video. I did meet a volunteer, but when I asked her a question about Churchill, she simply directed me to that part of the museum. I had to ask twice to get her to answer my question directly. So it wasn’t like the Jorvik Viking Museum or York Castle Museum where numerous volunteers had demonstrations or encouraged questions. It was interesting to learn about Churchill, but the museum fixates on that singular person too much in my opinion. For example, one display mapped how Churchill toured the world lecturing after the war. There’s a diminishing returns and I would rather they included more general World War II artifacts if they felt they had exhausted topics directly related to the bunker itself. They have a café and a gift shop of course.

The audio recording is well made, but as with any audio tour, puts you into an internal experience in your mind that separates you a bit from your environment. Don’t forget to take it off at times just to experience where you are.

It’s only a 4-star museum, but for the importance of its topic and the historicity of the building, 4.5 stars.