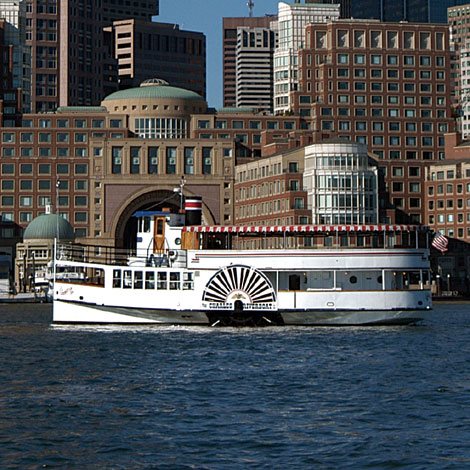 The Charles Riverboat Company hosts regular cruises of Boston Harbor including sunset and twilight cruises, uniquely, architecture tours where you’ll learn about the field and how Boston’s skyline was built over centuries. They launch from Rowes Wharf, the World Trade Center, and the CambridgeSide Galleria in Boston and Cambridge. Once a year they host a special tour to witness the USS Constitution, which you may know as Old Ironsides.

The USS Constitution is an old-timey military ship. Launched in 1797, it was active in the War of 1812, never lost a battle, and is the oldest technically still commissioned warship in the United States. Once a year, on July 4th, it sails the short distance from the Charlestown Navy Yard to Castle Island to fire a 21-gun salute at noon and receive a salute from the fort in return. This is given the awkward name, the ‘turnaround’ cruise, sparking the false idea that the Constitution needs to be turned around to stay in service or for preservation. The Charles Riverboat Company tour accompanies this trip both out and back on two ships: the Lexington and the Valiant. The Valiant is the most luxurious vessel in the fleet, but we were delighted to be aboard the Lexington, because it is a real paddle wheel boat! The Lexington is upscale and colorful, with two levels. Up top, the rug seems new, and comfortable seats arranged theatre style. There’s no lunch, but a full bar, made of dark wood. There’s plenty of shade from the sun, and it’s a nice environment just to sit, relax, and enjoy the water. Or you can go out to the bow and stand there to get some sunlight and better views of Boston Harbor. The idea of a harbor like Boston Harbor is to shield boats from ocean waves, so the water was perfectly still except for the wakes of the boats around us.

Built in 1987, the paddleboat runs on diesel, not steam. Interestingly, you can see the giant paddle wheels as you board, or view them through windows. On the upper level, the windows are in the floor, to the left and right. On the lower level, the windows are in the walls, and you’ll find an old-timey compass as well. If you visit the captain you’ll see that the ship is navigated with separate levers giving power to the left or right paddlewheel. Pro tip: Most people flock to the upper level, so try visiting the bow on the lower level for an intimate moment with your significant other or friends. You stay remarkably close to the USS Constitution for its entire trek there and back.

Cruising through Boston Harbor is attractive. Dozens of boats jockey for a good view of the Constitution as it sails, both small private yachts and large tour boats. It’s painted starkly in black and white with three sailing masts. Our captain did well in this friendly competition, keeping us within a few hundred feet of the Constitution the entire way out to Castle Island and back. That was enough to get a good view of the ship but not make out the people on board. Pro tip: bring binoculars. (Apparently the USS Constitution has a lottery, announced on their Facebook page, to come on board for July 4th, but I hear that it’s packed shoulder-to-shoulder and you can’t see much over the gun deck.)

The cruise does not go far, and we could still see Rowes Wharf throughout the trip. But you’ll pass dozens of landmarks. You’ll see fire rescue boats spewing water out of every firehose in celebration. You’ll pass the Moakley courthouse, the World Trade Center, the Institute of Contemporary Art, and the airport. Planes are prevented from landing during the ceremony, but beforehand and afterwards, planes came in for landing within 500 feet of us! Wonderfully, we also visited the drydock at 88 Black Falcon Avenue. It’s a working dock where you’ll see dozens of giant metal “container” boxes, with the cranes that work them off and onto ships. Some are damaged, and I’d never been so close before. At noon, having arrived at Castle Island, the Constitution fired its cannons. Of course you hear the shot with a delay, a moment after seeing the blast and smoke. Then Castle Island returned the salute, which we could hear but not see. Afterwards, all the ships present for the ceremony sounded their horns. Then a guide came on the public address system and gave us a few minutes of facts. I was pleased to find that I could hear him clearly, and was grateful that he paused to let what he was saying sink in.

The trip wasn’t as educational as hoped. The narration was too brief, should have come at the start of our tour, and included that paranormal investigators ‘look for ghosts’ on the Constitution, which is anti-intellectual. The music wasn’t intrusively loud, so it didn’t mask conversation, but the easy listening and island music (including ‘My Bodyguard’ and ‘Margaritaville’) was generic rather than edgy, and wasn’t turned off during the ceremony. The USS Constitution did not raise sails; it was just towed by a tugboat, with its three masts bare. The ceremony was short. There was no way that we could safely have gotten closer to the Constitution, but as such we weren’t quite close enough to see details or form interesting questions.

Sailing Boston Harbor with the Charles Riverboat Company, which you can do any day from Memorial Day to Labor Day, is a remarkable experience worth seeing. Their cruises feature beautiful, amazing views of the buildings, wharf, container cranes, cruise ships, airplanes landing, and old time and modern boats, with the Constitution adding a touch of history. I’ll give 4.5 stars to the Charles Riverboat’s USS Constitution Turnaround Cruise.