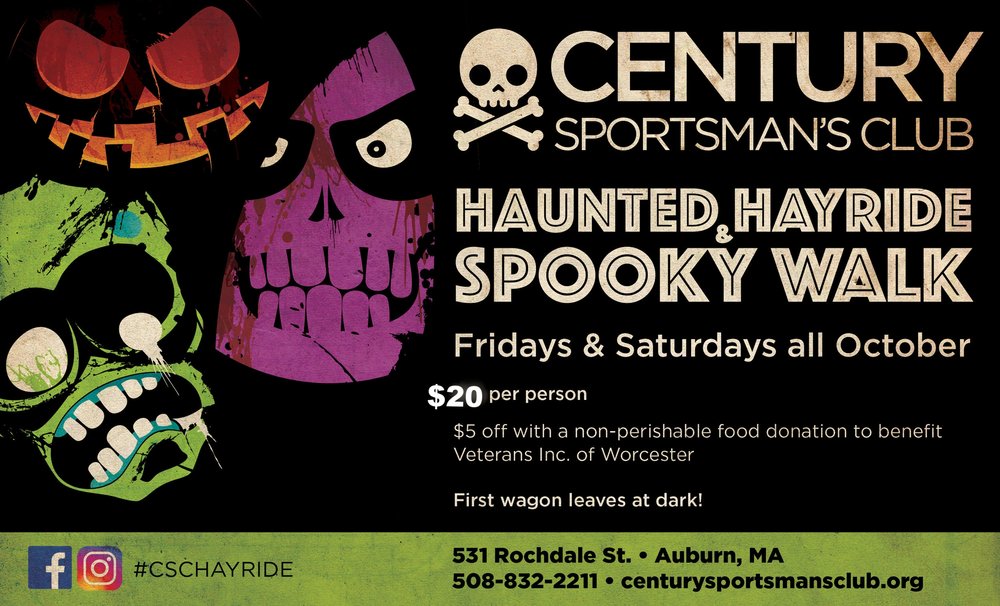 The Century Sportsman’s Club is a non-profit based in Auburn, Massachusetts, just south of Worcester. They support hunting activities and wildlife conservation, and run food collection drives to benefit local veterans and the local food bank. For nearly 20 years they’ve also run a Halloween event: a haunted hayride and a spooky woods walk.

The setting for is beautiful. On the hayride, you pass a lake, and are far enough away from city lights to see the stars. The woods are beautiful and spooky. When you arrive you’ll find plenty of parking and carved pumpkins in the ticket line area. Come into the headquarters building and you’ll find an indoor bar, buy glow sticks, or a light sword, and they project horror movies.

The event is all-volunteer, and they hit surprising peaks for an amateur attraction. At commercial attractions they will sometimes have long areas with filler like cloth strips, but every area at the Haunted Hayride has something built with love, even if it’s an amateur painted mural. The attraction is not very scary, so it’s safe for children, but it is scary fun.

The hay ride is the featured event. It’s 15 minutes long, a good length. You sit on a flatbed trailer with real hay and get pulled along a trail in the woods. You pass a vampire castle with good lighting, a butcher shop where they offer you a “hot dog” and then hold up a real dog, many dioramas, and two teenage girls who simply said, we’re ghosts, we dance! And they danced for us. You’ll see a few animatronics, especially inside the headquarters cabin. Although amateur overall, they hit some impressive, professional-level heights at times. I was delighted by the guy in a full body penguin costume holding a machete who shouted at us comically, “What? Penguins aren’t scary?” We met the clown from Beetlejuice, the movie. Actors know to cover both sides of the hayride, unlike at Witch’s Woods. They even climb up onto the ride in-between visitors, or hang onto the sides! The highlight of the hayride was when we stopped in Clown Town and 10 clowns came out to frighten us, and they shot confetti that glowed under blacklights. I’ve never seen that before at a Halloween attraction! The number of actors and attention was great.

The woods walk was less interesting. Most attractions with a woods walk line the walkway with string or ribbon so that you know where to go. At Century Sportsman’s Club instead they give you a guide, which slows down the rate that people can pass through, and the guide speaks constantly, distracting you from being spooked by the environment. The game where the guide shouts “Marco” and expects the guests to say “Polo” is similarly unnecessary and distracting from the suspension of disbelief. However, I enjoyed the tunnel of fog!

There was a hunting theme to some of the scares, such as a deer dressed in Halloween mask, and a diorama of a deer hit by a car. But you don’t have to be a huntsman to enjoy the attraction.

There are aspects of the Haunted Hayride and Woods Walk that are professional level — a great achievement by amateurs — but given the budget and some of the low points, let’s save the 4 stars for hopefully next year’s improvements. This year, 3.5 stars.

The Haunted Hayride is a great time that makes you feel part of a charitable community more than any other Halloween attraction in Massachusetts. It is a great night out if you live in the area.