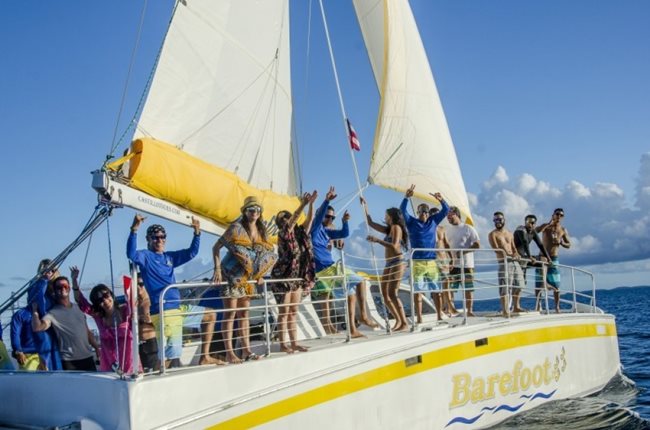 Puerto Rico has many beaches, but if you want to snorkel, get outside the city of San Juan and travel to one of many coral reefs, for example at Icacos Island. Castillo Tours provides one such trip, via catamaran.

It’s an all-day tour that began with a van pick up for us and other tourists from metro San Juan, taking us an hour east to a launch. Our driver, Frances, was professional, but did not point out landmarks or give a long talk on the history of Puerto Rico on the drive, or join us on the boat. So in this case, Castillo acted as a taxi service taking us to Barefoot Catamaran, which ran the rest of the tour.

We took many tours in Puerto Rico, and this was more a college party trip than others, with mostly younger people instead of families, but it didn’t get too wild. The trip out on the catamaran was beautiful, especially when they switched off the motor and we just sailed. They allowed us to climb up top and sun ourselves on the ship’s forward netting, feeling the rush of the wind. Unfortunately, upbeat music made it difficult to have a conversation. The trip felt crowded with the 30+ guests on the boat, but took just 30 minutes before we arrived at a beautiful Icacos Island. I was surprised that, upon arriving at the shore, that the captain chose a beach directly next to another tourist boat, instead of a more private spot, but we had great fun on the beach and playing around in the water swimming.

Then we left to anchor next to a beautiful coral reef. Many of the guests and I put on snorkel gear and fins, and swam out to observe. Wonderfully, there was an aquarium level of ocean life there, packed with fish to observe. Unfortunately, the water was just too choppy to see them for more than a few seconds. It was difficult to swim and maneuver against the waves, which weren’t fierce but just not comfortable for snorkeling. Water kept rushing into my snorkel’s air hose, and I got pushed around, including into a coral reef, scraping myself. Others got scraped too, I noticed. Within 15 minutes, everyone who had gotten off the boat was back on it. We were too far from shore to comfortably swim to it. Under better weather conditions, the snorkeling must be fantastic.

Although the water was not right for snorkeling, and every guest had given up, returning to the boat, the crew seemed resigned to stick to the schedule. It’s not Barefoot’s fault, or Castillo’s fault, that the weather made for choppy waves that day. But I was disappointed that we weren’t warned. The website says they will cancel due to bad weather or sea conditions. Then I was further disappointed that the crew chose to push through instead of to adapt. I suggested moving to a beach, but was told, well, the people paid for snorkeling, so this is it. The college students didn’t seem to mind, instead making a party of the loud music on the crowded boat. To me this seemed at odds with the natural beauty of the place, which could have been contemplated in stillness, but maybe I’m just an old fart who took the wrong tour.

Meanwhile, the crew served a decent lunch of cold cuts and sandwiches, then later fruit, pineapple, oranges, cookies, and drinks including some with alcohol. Eventually we sailed back to the landing and drove back in the van to San Juan.

It wasn’t a bad tour, but we could have gone to any beach in San Juan and gotten a similar experience, with more elbow room and without the travel. The guides at Castillo and Barefoot didn’t educate us or befriend us. The website says that the crew gives snorkeling lessons, but I didn’t seem them educating anyone, and they didn’t get into the water to help. They seemed unconcerned about those who couldn’t swim, giving floatation belts to them.

For us it was a 3.5-star experience, but let’s assume the best. If you confirm good waves and weather — you must cancel 48 hours in advance for a refund, but can reschedule with merely 24 hours’ notice — I feel I can give Castillo Tours and Barefoot Catamaran 4 stars for the catamaran tour to Icacos Island. And if you prefer a party atmosphere to intimate communing with nature, it would be higher.