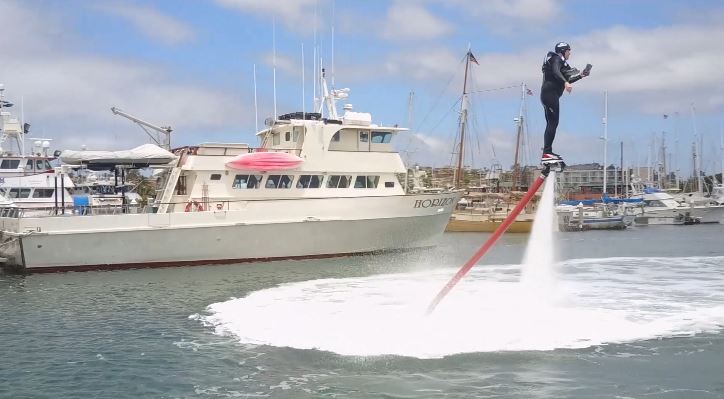 If you’re not an athlete, but want to do something awesome with great video for your friends that makes you look like a pro, you have to try flyboarding. This is when California Flyboarding, based in San Diego, takes you to a marina, straps a water jet to your feet, and you get pushed up and out of the water. You fly as high as 10 or 20 feet up, sometimes landing with a smooth power down of the jet stream, sometimes tipping over and crashing spectacularly into the water.

It’s as easy to learn as riding a bicycle. After 10 minutes of practice you will be hooting and waving from your perch in the sky. And it doesn’t hurt. The water jet operator can often bring you down swiftly when it looks like you are toppling over, and I only bellyflopped hard enough to hurt once in a full hour’s session. But it looks insane on video, like you’re the most courageous person on the planet.

It’s hard to convey how much fun it is. It is joyous, thrilling, and safe. The entire excursion took me only a few yards from the marina docks, and they put you in a wet suit if the water is cold.

In just a few minutes, they explained how it works, the safety procedures, got me into a wet suit, and got me out over the water. Then it was pure adrenaline and fun. There was never a moment when I felt in danger, as the water jet operator brought me down whenever I flew too close to any obstacle in the marina.

Take it from me, who is seriously overweight, and so tall that I can have trouble balancing: anyone can flyboard. It’s as impressive as hang gliding and skydiving but so much safer and safe feeling.

I’ll give California Flyboarding an easy 5 stars PLUS, an accolade that I give rarely, making it a MUST DO when you are in San Diego. We made a special trip from Los Angeles and did not regret it.

Paul kindly allowed us to shoot video, and even had flew a drone with a camera to take shots from all angles. Note: it’s fun to show all the splashdowns, but after about 10 minutes, I wasn’t crashing often. During a second session I’m sure I would have been mostly in the air, not in the water.