Adam Trent: A Sleek Experience in the World of Stage Magic (4.5 Stars) 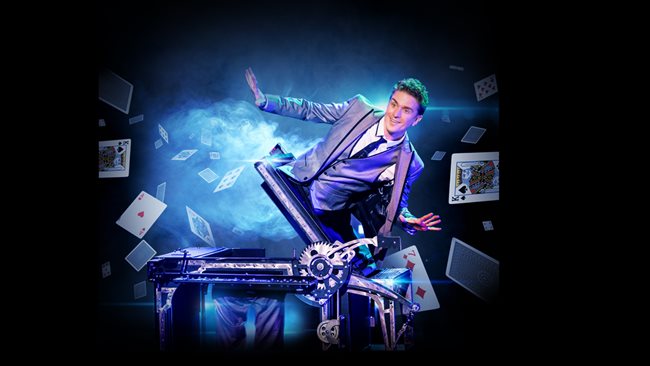 As soon as you enter the theater, your eyes are privy to a show featuring lasers, fog and special effects. Pictures and words seem to hang magically in mid air. Beams of light dance on the stage. All of this occurs, before the show even starts. You are instantly taken into the realm of magic. The tone is set and the stage is ready for Adam Trent, Magician and showman.

Adam Trent has been one of the most successful magicians on Broadway having broken records on two tours. He has made numerous television appearances including the Ellen DeGeneres Show and the Today Show. He even had his own television special and a TV series on Red Bull TV. Many in show business are seeing him as the next big name in magic.

Once the show begins, you can expect not just show magic, but some amazing special effects. Much of the show centers around projection and light up graphics that blend seamlessly into the flow of the performance. Where these illusions begin and the real stuff ends is hard to tell. At times you see what you think is an illusion only to find it’s real, while other times, real objects and real people disappear into holograms and fly off in the distance.

That in and of itself would make the show worthy of some great eye candy. But Adam adds additional layers with both his stage magic and performance. At one point, Adam uses his illusions to draw, skateboard and even fly as he disappears in and out of reality. He even duplicates himself and become his own backup dancers as he performs on stage.

But this is also a magic show. And Adam is heavy into audience participation right from the start. Most magicians will call up one or two participants, but Adam has worked in mass participation, involving the whole crowd both at the beginning and at the end of the show. If you are lucky, you might be up on stage performing with him as a volunteer. Or you might be part of the crowd donating objects for Adam to perform magic with.

What gives his show mass appeal is his family friendliness. Many parents brought their kids out and more then a few were up past their bed time to see Adam. On more then one occasion kids were the center of attention as they volunteered to be up on stage. Adam rewarded them with their own magic deck of cards, partially to make the audience aware that they are on sale in lobby, but also because he wants to foster the next generation of magicians. Adams tells us that he started in a similar manner. He takes us back to his childhood where he lets us know how he was given a magic kit as a kid and that sparked an interest in him becoming a musician.

But it’s a magic show and we expect tricks, right? Adam has no shortage of those, both big and small. He uses a camera to get a close up look so that even simply card tricks are easy to see and hard to pull off since all eyes are on him. He gets away with nothing since it’s so easy to scrutinize his performance and yet, he is flawless with his presentation making it very hard to see how he pulls off his tricks.

As for big illusions, he has those too. How about chopping himself in half and completely separating himself from his legs onstage in view? Yup he does that. How about pulling off a mask and magically appearing in the audience seconds after being onstage. He does that too.

Adam Trent is a fun, family friendly magic show everyone can enjoy and everyone can participate in. He is performing here in Boston at the Boch Center right in Boston’s Theater District March 9th through the 11th so catch him fast!

Matt Martino, a Horror Writer / Director / Hauntreprenuer, is a lifelong horror enthusiast who runs a small horror empire in his hometown of Somerville Massachusetts. He has written and director two feature films. His most recent movie Chainsaw Maidens from Hell debuted last month on Amazon and features Kane Hodder, Lloyd Kaufman and Sarah French. Every fall he hosts the largest Halloween celebration in the Boston area – The Maze of Terror – a two week long festival of music, monsters and mayhem!