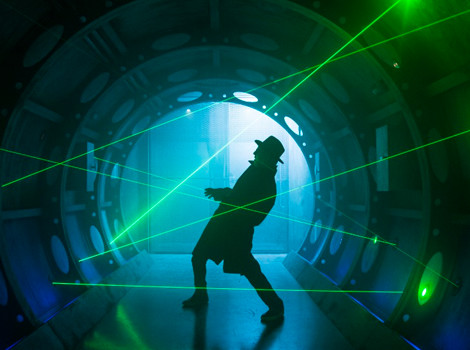 There are now several escape room experiences in Boston, but 5-Wits was the first and is still the best. It was founded by Matt DuPlessie, an MIT and Harvard engineer who had previously built animatronics in Florida. The idea of an escape room is this. You get locked into a room filled with puzzles, and then you must solve them to escape. Their first installation, Tomb, was an Indiana Jones type experience where you moved from one room in a fictional cave to another room.

It’s hard to explain, but 5-Wits brings a professional, movie grade level of production to their current installation at Patriot Place in Foxboro, Massachusetts, where they have two adventures for you. 20,000 Leagues is my choice, if you have to choose just one. Our guide was Chrissy, who was high energy and fun. Of course her job is to stand back and let the participants solve puzzles, but she set up the adventure and guided us through each room. She was patient with us as we tried to figure out the puzzles on our own, and provided hints when needed. When she saw that someone wasn’t participating, she would include them.

The set designs in 20,000 Leagues are first rate, especially given the competition in New England, where production values are low. The rooms moved around and shaked. Special effects included a giant squid and fog effects, with old-timey steampunk electronics. It was a great group activity, with the puzzles easily explained and solved. Everyone had something to do. 5 stars. Also worth going through, Espionage, the other attraction, only gets 4 stars, as our expectations for escape rooms grow and grow over time. This is a secret agent challenge, where participants play spies. At its highest moments, we thrilled to be searching for hidden items, dodging lasers and defusing weapons. But the adventure has too much exposition, and unlike 20,000 Leagues, it’s given by video instead of a live guide. So it was harder to understand, and in our group of teens and pre-teens, harder to hear as well. Some of the puzzles were great, but others just confused us. The guide makes the experience, and last year we had a guide to Espionage who literally stood on his head to amuse us!

Some of the sets of Espionage are very impressive, but there’s also a room that is simply an office space with old electronics and no set design. Of course, that’s what every other escape room in New England looks like, so even at its lowest point, 5-Wits meets or outperforms other experiences. There are a couple of times in Espionage where you hit a setback instead your hard work moving you forward through the adventure. That was demoralizing. And there were places where not everyone in our group of 12 people had something to do. They have 5 alternate endings to Espionage. 5-Wits is accessible by children, but fun for adults too. I’m glad to give it a full 5-stars. It’s the only theme park level, movie set quality escape room experience in New England.